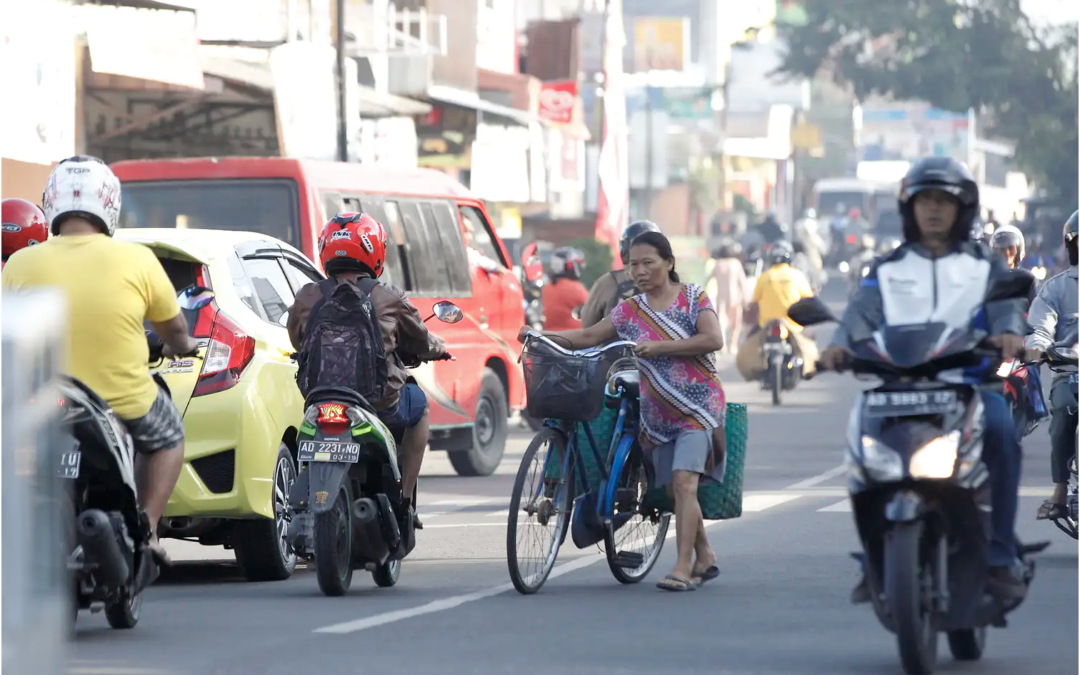 Cycling can be especially appealing to women in developing Asian cities who have fewer mobility options due to their gender and socioeconomic status. Cycling allows them to travel through multiple stops in the city to fulfil work and household responsibilities.

In the Indonesian city of Solo in Central Java – long considered a hub of Javanese culture and a people-centred creative economy – cycling has been around since the Dutch colonial era.

The city’s female residents historically cycled at the same rate as males. Improved mobility increased their access to education and employment opportunities.

The government and businesses also had pro-cycling policies like financial incentives for bicycle use and parking facilities.

Read more:
Bike share programs are on the rise, yet the gender gap persists


However, like many rapidly urbanising regions in the global south, motorisation sent Solo’s motorcycle ownership soaring. It more than doubled between 2009 and 2013 to nearly 424,000. Cycling has been left to decline in terms of policies, investments and ultimately preferred mode of travel.

Our research in Solo investigated the question of how to promote cycling among women living in areas with poor access to public transportation networks. We conducted focus group discussions, individual interviews and field observations involving lower-income women from 10 Solo neighbourhoods with limited public transportation access.

Dream of ‘women on wheels’ is still far away

With nearly one vehicle per person, Solo has rapidly become a motorcycle city. Most of its transportation planning has focused on improving conditions for such faster vehicles.

Bicycles now account for a mere 1% of mode share compared to 67% for motorcycles. However, this boom in motorcycle ownership has not been as accessible for low-income households.

This has impacted women more as men tend to have priority access to motor vehicles, mostly due to gender-based roles within households. In the end, poor women in neighborhoods with limited access to public transportation are often left with walking or cycling as their only transport options.

But the local government’s policies do not support the use of bicycles, despite several initiatives.

In an attempt to revitalise cycling among its residents, the Solo government has transformed its main thoroughfare, Jalan Slamet Riyadi, into a public space for walking, cycling and other communal activities for “Solo Car Free Day” since 2010.

The city’s 28km of “slow lanes” – separating bikes from motorised vehicles on key corridors in the city centre – are the country’s longest.

However, these cycling improvements are concentrated in the city centre, more than 9km from the neighbourhoods where most of our interviewees live.

Motorcyclists have also taken to using Solo’s slow lanes and other smaller roads to a degree that has often endangered cyclists.

The combination of lack of reach and dominance of city roads by motorised vehicles makes them largely inaccessible to the majority of the city’s female cyclists, whose poor neighbourhoods are located far from transit lines.

Despite significant barriers, many women and girls still prefer to cycle around Solo.

However, most women only cycle at the neighbourhood scale. Here the availability of smaller, local roads eases the experience of travelling with a bicycle.

More than a third of our respondents usually used bikes for shopping at markets and neighbourhood kiosks.

Cycling is especially popular among girls in elementary and middle school. They have the highest rates of cycling among women.

For instance, 52% of female students rode a bicycle to school. Compare this to over 20% that walked and a mere 5% that went by public transport.

But cycling rates drop significantly in high school, possibly because their schools are located in the city centre or outside their immediate neighbourhoods.

Age-specific gender roles may also explain the drop. Young women aged between 16 and 25 years report the lowest rates of cycling, followed by women between 25 and 34.

Our findings indicate that cycling plays an important role in the lives of many women. Without sufficient support from the government, poor women in areas with limited access to public transportation pay the highest price.

What should be done?

During our interviews, many respondents suggested the expansion of the slow lane cycling network beyond the major arterial roads in the urban areas.

This means the city government’s pro-cycling initiatives should account for Solo’s dispersed residential areas to promote cycling for daily lives – not just for leisure and recreational purposes.

After connecting downtown thoroughfares with neighbourhoods on the outskirts, however, another challenge remains: motor vehicles increasingly dominate roads and public space in general.

Many of our respondents felt defenceless, sluggish and out of place among speeding motorists. They dreaded being hit or crushed by them.

For women having to travel longer distances beyond their neighbourhood, a common strategy was to cycle on secondary roads.

To support such strategies, the government must employ active interventions across a range of roads and streets to calm, limit and, in some cases, exclude motorised traffic.

Our respondents also stressed that cyclists do not feel respected as there are no designated parking spots for them – not even when they’re willing to pay the same rates as motorists.

They emphasised the importance of upgrading cycling infrastructure – such as special lanes or parking spots – to promote comfort and convenience akin to that experienced by motorists. These facilities are especially crucial for women who have to fulfil multiple purposes on their journeys.

Susceptibility to harassment and crime, along with cultural norms, also discourage women from cycling.

Some suggest a riding group for women to prevent harassment, physical attacks or robbery when they travel on bikes – especially in the early mornings when essential trips to the market and mosque take place.

Others discussed public education and outreach campaigns. These would target different age groups of women and highlight the health, convenience and environmental benefits of cycling.

The “Women on Wheels” research in Solo is supported by Yayasan Kota Kita and conducted together with John Taylor (FAO Bangladesh) and Mariel Kirschen (Nelson/Nygaard Consulting).

This article is republished from The Conversation under a Creative Commons license. Read the original article.